The Carnival season has officially arrived! If you ever heard about the festival Carnival you will know exactly what it is. It’s a huge event in the whole of Europe! Carnival season a festive time which occurs before the Christian time of Lent. Nowadays it just means getting ready with some amazing costumes and heading off to a party! It’s sort of like a European version of Halloween, but without trick-or-treat or all the scary and creepy effects. So if you are going to a Carnival party this year, make sure to put together a fantastic costume for it! Check out our collection of Carnival costumes! If you are going with your family, why not get matching costumes? That’s why we have collected 20 Carnival family costume ideas! 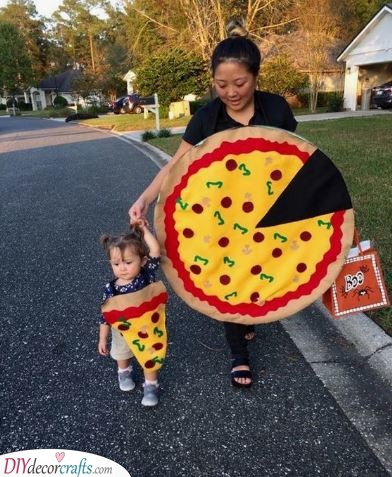 Are you in search of cute costumes which your whole family will be able to put on for Carnival? How about dressing up as pizzas? If you have any kids in the family, they can wear one slice of a pizza kid Carnival costume, while the parents can wear a whole pizza, with that one slice missing. Or perhaps you are going with your husband or wife, then both of you might want to dress up as two halves of one whole pizza. This is a super cute costume idea for any family! 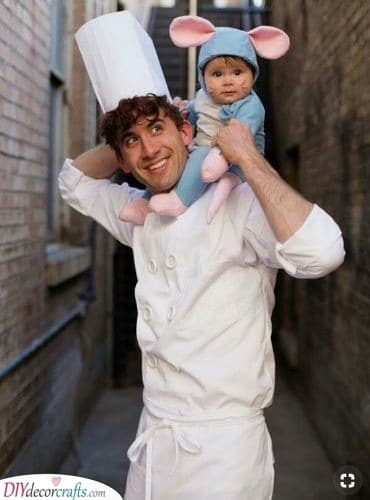 Have you and the family watched the amazing animated movie Ratatouille recently? If so, you might have just become inspired by it! Why not use the movie as an idea for your Carnival costumes, getting the whole family involved? This might mean the parents dressing up as Alfredo Linguini, the young and clumsy man and as Colette, the female chef in the restaurant. A great idea is to dress the kids up as rats from the movie, such as Remy, the talented cook. These costumes will be fairly simple to put together!

3. Cops and Robbers – Get Ready for Carnival 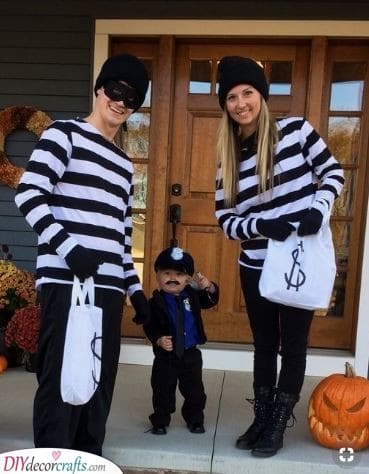 Now here is a creative costume for you and the family which is super simple to make! This is no other than the cops and robbers costumes! Have the parents dress up as the robbers, putting black and white striped shirts on them, as well as black gloves, black beanies and black eye-masks. Then get the kids to dress up as tiny police officers, pinning a fake police badge on their jacket and placing the trademark police cap on their head. This will be an awesome look for the whole family!

4. Straight from the Farm – Farmer and Animals 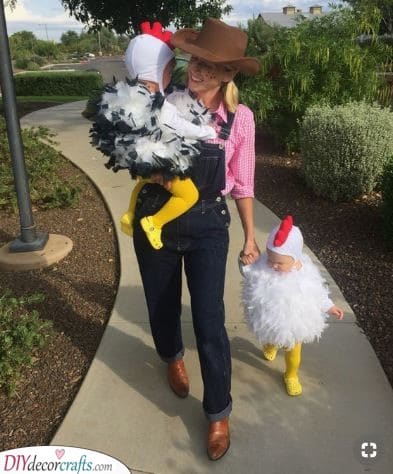 Another costume idea which will be fun to put together is a farm costume for all of the family! This consists of getting the parents dressed up as farmers and having the kids dressed up as animals. These costumes will be fairly easy to put together. The adults will need to wear checkered shirts with overalls, while the kids will have to be dressed up as various farm animals. For example, chickens, cows or pigs will make fantastic choices for the animals of your farm. This is an adorable way to get the whole family dressed for Carnival!

5. Mario and Toad – For Any Nintendo Fans 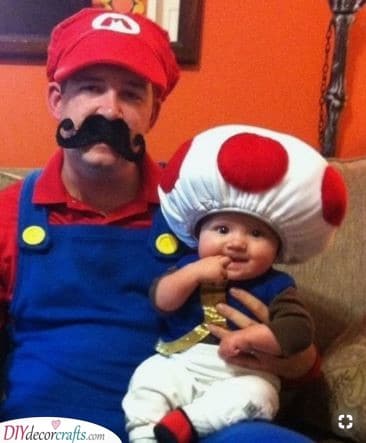 Perhaps you and your family love playing Nintendo games and maybe one of your favourites is the Mario series! If so, why not use it as inspiration for the family’s Carnival costumes? You can have the parents dress up as Mario or Luigi as well as Princess Peach. Then dress the kids or toddlers up in toad costumes! This baby Carnival costume will look super cute on them! You don’t necessarily have to order these costumes online, you will be able to create them yourself if you like arts and crafts! So why not give this family costume idea a try? 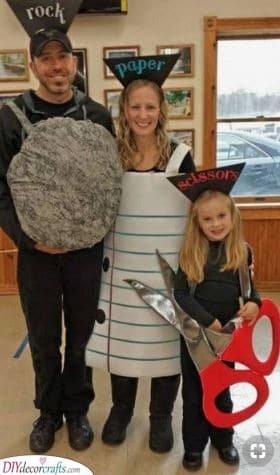 Is there a favourite game you and your family play when you have to decide on something? This might be something like tic-tac-toe or even scissors, paper, rock! Why not dress up as a game? This is incredibly creative and will be the marvel of any Carnival party. You can make the costumes yourself, by cutting out pieces of cardboard, to create the image of a rock, a sheet of paper and a pair of scissors. Have the family dress in full black, then attach these cut-out cardboard accessories to everyone!

7. The Flintstone Family – Adorable and Fun 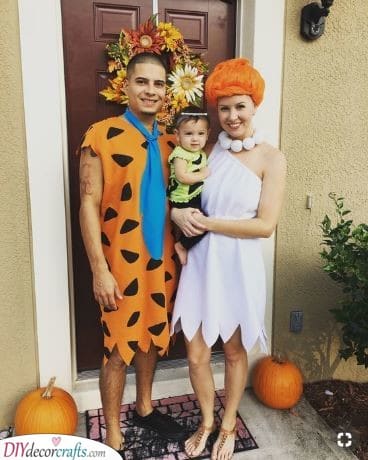 Are you trying the get the family dressed up for Carnival season? Then why not pick a set of costumes which are characters from the same family? For example, why not try getting dressed up as the prehistoric family, the Flintstones? This will mean there is a costume for everyone in the family as there are quite a few characters. If you like to sew, you will be able to put together these costumes yourself, as they are not too difficult to create. This means that you will be able to create a cheap set of Carnival costumes! 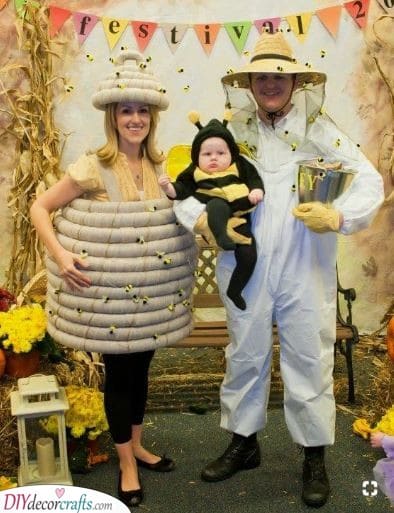 Check out this awesome set of costumes which will look awesome for Carnival season! Get the family dressed up as the most important elements of honey-making!  For example, dress dad up as a beekeeper and mom as a beehive. Then simply find a bee costume for the kid, which will make them look super cute! You can decorate the costumes further by attaching small cut-out bees to them. You can also have one of the family members hold a jar of honey as a final touch!

9. A Bottle of Booze – With Cigarettes on the Side 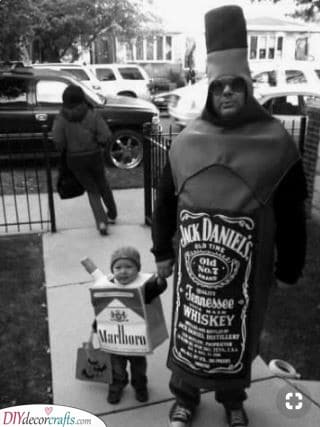 Have you considered getting the family dressed up as toxic and unhealthy substances? For example, getting dressed up as a jar of whiskey or as a packet of cigarettes? While this may seem like a joke at first, it’s a great way of spreading awareness about dangerous and harmful items. If you like this idea, you might decide on making it yourself! You can dress one of the kids up like a pack of cigarettes, cutting out and painting a cardboard box in a similar way. Create a bottle of alcohol by stitching together pieces of fabric. You will be certain to find tutorials on how to create these looks for Carnival! 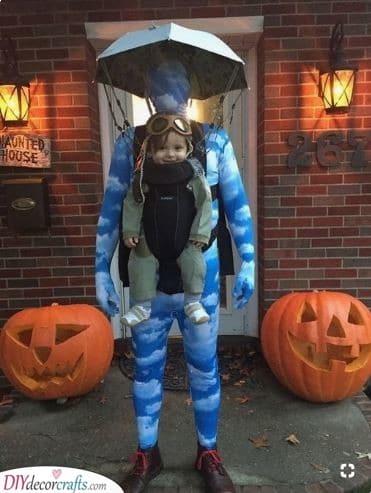 Here is a fantastic costume idea for anyone who isn’t sure as what to dress up as for Carnival! If you have decided on a family costume, why not create a skydiving baby? One of the parents will have to wear a suit or just some simple clothes, which have clouds painted on them as if it were the sky. Then simply attach your baby or kid to your chest, with some goggles on their head and an umbrella shooting up from their body, as if they were diving through the sky!

11. The President – With a Bodyguard 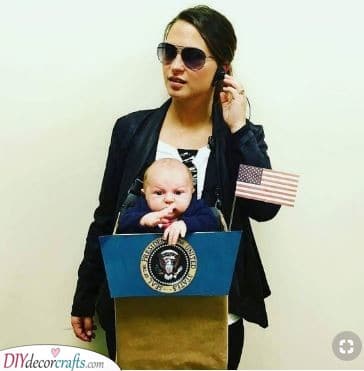 Are you still in search of a creative costume for Carnival season? Then check this one out! Dress your baby or toddler up as the President of the USA, while one of the parents can dress up as a bodyguard. This means wearing a suit and some cool sunglasses, while the baby should be in a stylish suit! You can even create a small box to place your baby behind as if they were preparing to say a speech. 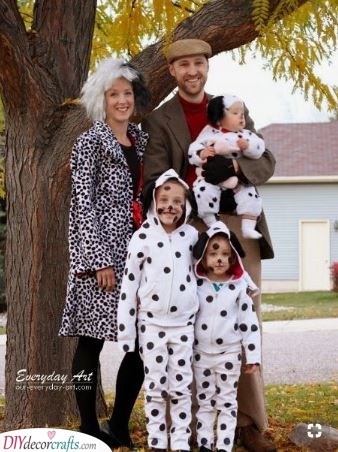 Here is another set of fabulous costumes for the family for Carnival! If you loved the Disney movies of 101 Dalmatians, you might use it as inspiration for getting ready for the event! You can get the kids dressed up as the dalmatians from the movie, while the parents can dress up either as the owners of the dogs. Another choice is for the parents to dress up as Cruella de Vil and one of her goonies. Either way, we’re sure the family will look fantastic!

13. Getting Saved from a Shark – Carnival Costumes for Families 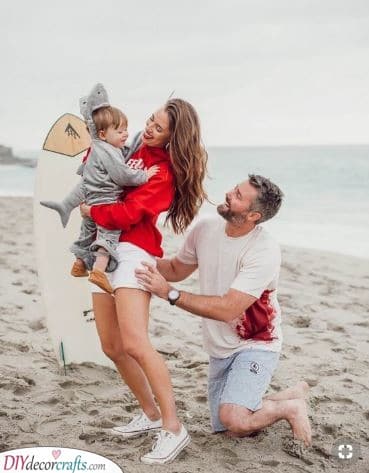 When you think about Carnival costumes, you will want to get as creative as you possibly can! If you and your family live near a beach, you can use that to influence your costumes! A great idea for a beach Carnival might be getting the baby dressed up as a shark. One of the parents can get dressed up as a lifeguard while the other one wears a shirt, which is tinted red with “blood,” as if the baby shark had taken a bite out of them!

14. Going on Safari – Perfect for Carnival 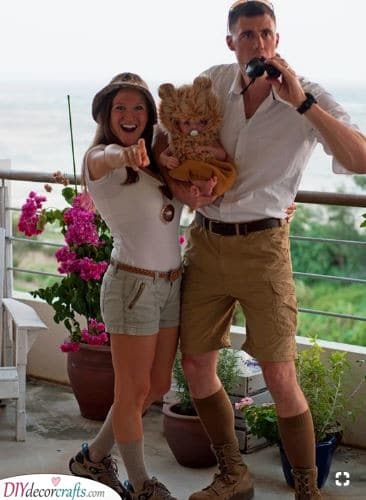 How about you go on safari for Carnival? By this, we mean getting dressed up in your usual safari clothes. At least, this will be the dress code for the parents. Then dress up the kids in animal costumes! Depending on what the kids want, you can go for anything from a lion to a giraffe to an elephant! We’re sure anything will look adorable on your kids!

15. An Aladdin Family – Inspired by Disney 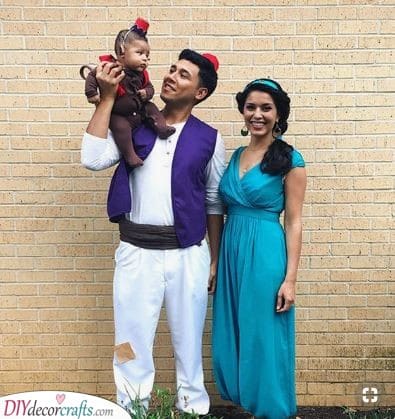 Here is yet another fantastic set of costumes for the whole family for Carnival! If you loved the movie or story Aladdin, then you might as well use it as inspiration! Dad can dress up as Aladdin while a perfect Carnival costume for women is for mom to dress up as Jasmine. For the kids, you might dress them up like Aladdin’s small monkey, Abu, or as Jasmin’s pet tiger, Rajah. Another option is to dress someone up as the Genie. We’re sure if you choose this set of costumes, your family will look fabulous during Carnival!

16. Skydiving Together – Another Great Idea 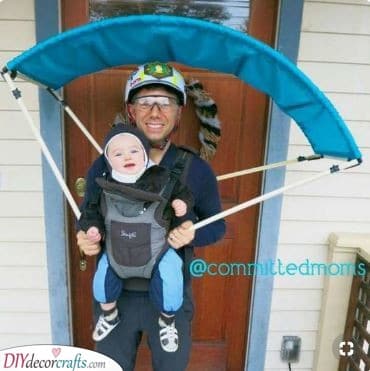 While we have already talked about using the sport skydiving as an idea for your Carnival costumes, here is another take on it! Instead of one of the parents dressing up like the sky, with clouds painted all over their body, have them dress up as a fellow skydiver. Then attach the baby to the parent. Make sure that both of them wear helmets and goggles to complete the look. Then add some sort of umbrella or fabric above your heads, as if you were gliding through the sky. 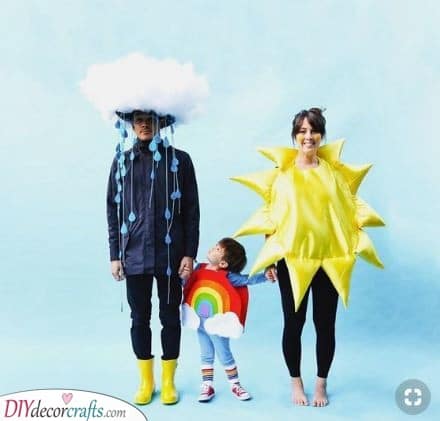 Get creative with your Carnival costumes! Here is a great idea for your family! For the parents of the family, have them dressed up like a rain cloud and the sun! You can use cotton wool to stick on a hat, to create a cloud, and hang down cut-out rain droplets from it. Create the sun out of yellow and orange fabric! Then dress up the kid or kids as rainbows! This is a super cute idea, as it symbolises that the rainbow was made with a bit of sunshine and some rain! 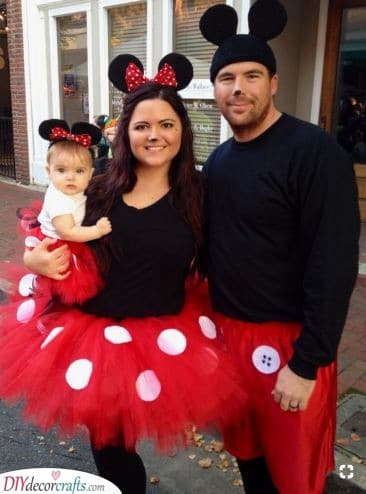 Is the family a huge fan of Disney characters? If so, make sure to take some ideas and inspiration from them! A great example is to get the whole family dressed up as characters from Mickey Mouse! For example, Mickey Mouse for dad and Minnie Mouse for mom. Then dress up the kids in the same designs as the parents! Your family is guaranteed to look adorable for Carnival in these costumes!

19. The Wizard of Oz – Creative and Unique 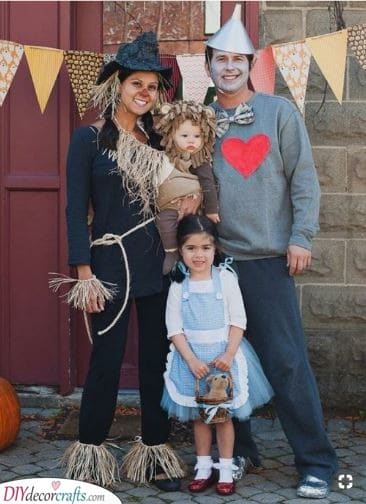 Another awesome idea for costumes is to get the family dressed up as characters from The Wizard of Oz. The four main characters are a perfect place to start! Dorothy, the Lion, the Scarecrow and the Tinman are all great choices to dress up as! Just check out the example above to see how easy it is to put these costumes together! 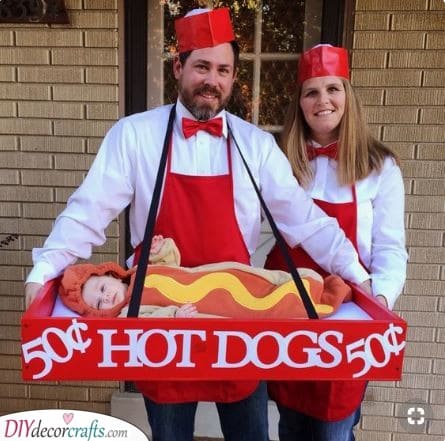 Here is another set of costumes for the family for Carnival season. Dress the baby up as a hotdog and place him in a crib or stroller which has “hot dogs for 50 cents” written on it. Then get both of the parents to dress up as servers in a hot dog vendor! This will be a huge hit as a Carnival costume!

We hope that these ideas have given you some inspiration for Carnival season. For other ideas, such as Carnival costumes for men, visit our website!